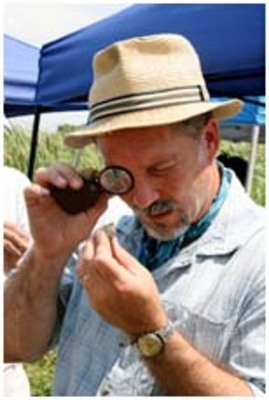 I am interested in how different ethnic groups have used the Great Lakes throughout prehistory and into the mid 19th century. To fully understand the opportunities available along these inland coasts I also study all aspects of the natural environment and cultural landscape to learn how humans have adapted to this dynamic landscape.

Prior to coming to NMU I worked for eight years at The Field Museum in Chicago where I was the Head of Collections for the Department of Anthropology. This position afforded me the opportunity to study firsthand the intricate details of material culture of ethnic groups from around the globe. I also had the opportunity to meet with indigenous representatives that were seeking to repatriate objects or remains, and to be trained in the use of analytical equipment such as an X-ray fluorescence (XRF) elemental analyzer. During this period I also taught courses in archaeology and co-directed archaeology field schools for DePaul University. Some of the archaeological sites I have worked on include: the Cable's Bay Fishing Village, the Burke Farm, and the MPS-Isle de Castor Village Site (Middle Woodland) on Beaver Island; Relocating Camp Douglas - Civil War Prison (Chicago); The Tetter Homestead – Kankakee IL (reconstruction era); Pullman State Historic Site - Chicago (early industrial); the Kubinski Site - a Middle Woodland Ossuary (Romeoville, IL); and the Brewster Creek Mastodon (DuPage County, IL).