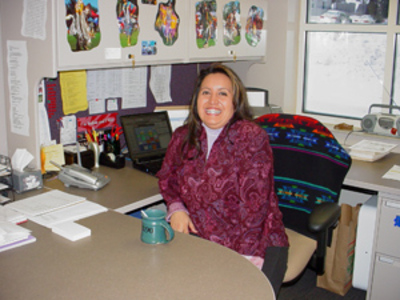 April Lindala (Grand River Six Nations) has lived in Marquette since 1988 when she first attended Northern Michigan University as an undergraduate. She completed her bachelors' degree in speech communication with a minor in Native American Studies in 1997. April obtained a master's degree in English in 2003. Her M.A. thesis was titled, “Voices I Color.” In 2006 she obtained a Master of Fine Arts degree in English with a concentration in creative non-fiction writing. Her thesis was titled, “Relations.”

April has been employed at NMU since 1993. Her first full-time position was at WNMU-TV13 as the community outreach specialist. April moved to the Center for Native American Studies as an admissions counselor in 1998. From 2000-2004, she was the assistant director of Diversity Student Services. She is currently the director of the Center for Native American Studies where she also teaches. She has had several poems published in various anthologies and publications. Most recently, she was the project director, assistant editor for the anthology, "Voice on the Water: Great Lakes Native America Now." The book also features two of her poems.

She has been a very active member in the community and has served on several boards including the Great Lakes Recovery Advisory Council, the American Indian Coordinating Council, the MAPS Title VII Indian Education Parent Advisory Committee, the Marquette Area Blues Society, the NMU Alumni Board, the Women's Center of Marquette board, the Northern Options board, and the City of Marquette Arts & Culture committee.