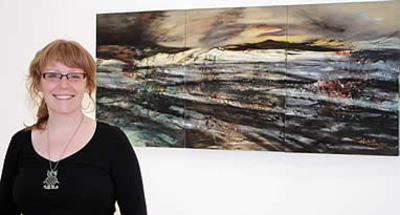 It was her experience working with six others to establish the former 231 House of Muses that put Melissa Matuscak (DeVos Art Museum) on the path toward running art galleries.

Originally planning to apply her NMU graphic communication degree in an advertising or marketing position, she instead chose to stay in Marquette for a year after school to start the Washington Street gallery. House of Muses showcased artists and local musicians before it was destroyed by fire in 2004. Matuscak is clearly disappointed talking about the burned-out, boarded-up shell downtown, which is all that remains of the once thriving, youth-friendly atmosphere.

Matuscak worked at a contemporary Asian art gallery in Chicago before settling in to a graduate program in arts administration and policy at the School of the Art Institute. She studied art history and critical theory, along with practical business skills such as grant writing, which is increasingly important to galleries with limited budgets. Matuscak was hired as the director of NMU’s DeVos Art Museum two weeks before graduation.

Behind the scenes, Matuscak is involved in grant writing and in research and conservation efforts related to Northern’s permanent collection of donated artwork. The “other duties as required” part of her job description includes drives as far as Chicago to personally deliver art because shipping would be more expensive. On the day of the interview, Matuscak was even up on a moving scaffold adjusting lights suspended from the rafters (pictured). She applies her graphic design skills to postcards and posters for shows and also teaches one course each semester titled social structures and concepts.