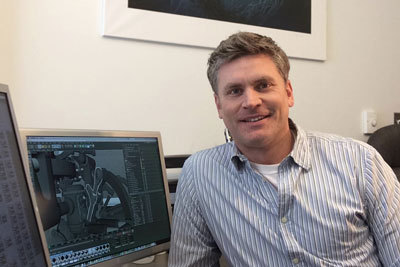 Stephan Larson started creating images with computers long ago when an Atari 400 showed up in his home (yes, Atari used to make computers). He continues to utilize the computer as his primary production tool with the majority of his time experimenting with 3D animation, predominantly in non-narrative explorations. But when not trying to overheat computers with abstract simulations, he dabbles in creating 3D models of quirky characters because he finds the process immensely amusing. His work is influenced by biological growth, quantum physics, synesthesia, Abstract Expressionism, eight years of work as a medical animator, and the Hulk. His animations have been shown in nearly two hundred exhibitions throughout the world including the ACM SIGGRAPH Electronic Theater and Art Galleries, Anima Mundi in Brazil, Art Futura in Spain, and earning an honorable mention in the Prix Ars Electronica in Germany. He has been teaching at Northern Michigan University since 2001 and is one of the few people in the world who still plays Tetris.