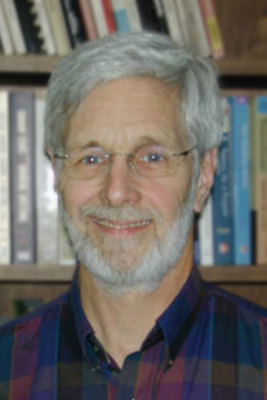 Mark Smith began his teaching career at NMU in 1970. His publications include "Using Markings to Respond to Student Writing," English Journal, 86.2 (February 1997), 79-80; "From Expressive to Transactional Writing: A Case Study," English Journal, 81.8 (December 1992), 42-47; and "Writing Whole-istically," Journal of Teaching Writing, 2.1 (Spring 1983), 12-28. From 1978-82 Mark served as one of the two co-directors of the Upper Peninsula Writing Project, an authorized site of the National Writing Project; during the past 5 years he has continued his involvement in the Project in other capacities. In 1974 he established a peer tutoring program for NMU's Writing Center and served as its director for 17 years. His other professional pursuits include working with at-risk students and teaching an interdisciplinary course on ancient Greek and Biblical cultures. When he's not writing and working on writing with his students, Mark enjoys doing things with his children, bicycling (even through the UP's harsh winters), playing basketball (despite his many air balls), and camping.