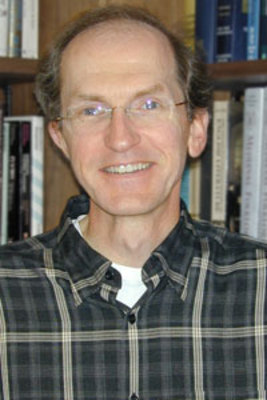 Peter Goodrich came to Northern Michigan University in 1984 as a literary generalist and technical writing instructor. Before joining the NMU faculty he studied Anglo-Irish literature at Trinity College in Dublin, Ireland; taught at the German universities of Mainz, Marburg, and Kassel, at Quinebaug Community College in Connecticut, and at the University of Michigan in Ann Arbor. His scholarship has primarily explored the figure of Merlin in Arthurian legend through all literary periods and genres, and the Global Middle Ages. In addition to many individual published essays and conference presentations on Arthurian literature and related subjects such as New Age cultism, mad scientists, young adult and heroic fantasy, he has edited and published The Romance of Merlin (Garland, 1991) and is coeditor of Merlin: A Casebook (Garland, 2001). He is an active supporter of internationalization, and is currently working on medieval studies as a world discipline, Turkish and Thai literatures, and English as a Foreign Language for international students planning to study in America. Peter caught the hifi bug as an undergraduate and moonlighted as a sales associate in Boston area and Ann Arbor hifi stores before coming to Marquette and eventually founding his own high performance audio-video retail business, Sound Surroundings. When not occupied with academic matters, business, family, and keeping up a Victorian home, he may be caught dreaming of travel to exotic places.